Sound Lock is a free program that allows you to limit the sound output level from your computer speakers. The program monitors the loudness of playing media and decreases it to the level you have set the audio volume too. If the playing media is too loud, Sound Lock will turn down the loudness and then turn it back up when the loud media finishes playing. This kind of automatic audio volume control is also known as normalization.

Sound Lock can be best appreciated when you’re watching movies on DVD or Blu-ray. You might have noticed that the audio volume fluctuates wildly from scene to scene, dropping to a whisper during dialogues and then blowing out your speakers during action scenes. This usually occurs when you attempt to playback 5.1 sound through a 2.1 stereo system or if your home theatre system is improperly calibrated. 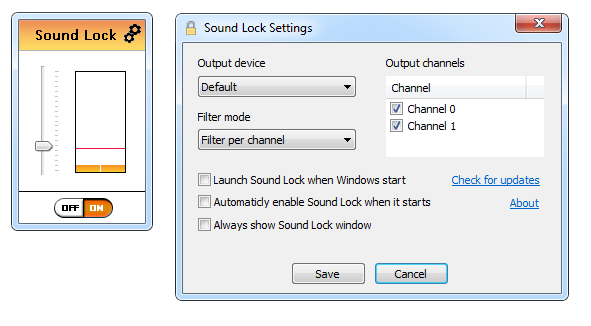 Previously, I showed how you can smooth out the audio using a technique called Dynamic range compression in VLC Media Player. If VLC is not your media player of choice, and if your preferred media player doesn’t feature audio normalization, you can use Sound Lock.

Sound Lock operates independently of the media player in use and acts only on the audio channels on the system – up to 14 channels in all. To use Sound Lock, click the “On” button on the program and drag the slider to limit the loudness to an acceptable level. Try doing this by playing a particularly loud scene of a movie and then use the loudness bars to gauge. Once you’ve set the limit, do not touch the system volume control. Doing so will turn off Sound Lock.

Keep in mind that although Sound Lock can detect and enforce audio limits on up to 14 channels, it cannot set different audio levels on different channels. You can however choose which channels you want to apply sound lock to, and then set the same audio level on all the selected channels.

The program, as it is, a pretty useful for media players that doesn’t have built-in loudness control, but it would have been even more useful had it allowed independent control on each channels.