The initial rumours that Microsoft will prevent third party applications from bypassing Metro and installing a start menu to Windows 8 were all unfounded. Currently there are no less than a dozen different ways that you could add a start menu to the operating system of which Classic Shell, ViStart, StartMenu8, Start 8, and Power8 are among some which I can recall from the top of my head. All of these have borrowed the same legacy design from Windows 7 with the exception of StarDock’s Start8 which offers users the option to run the new Windows 8 Start Screen in the form of a menu.

SweetLabs Inc. has released a new program called Pokki Menu that has an entirely different take on the start menu. “Pokki has brought back the core Start Menu functionality in a way that you’re familiar with, but has been modernized to be easy and enjoyable to use”, the developers announced on their blog on Tuesday. 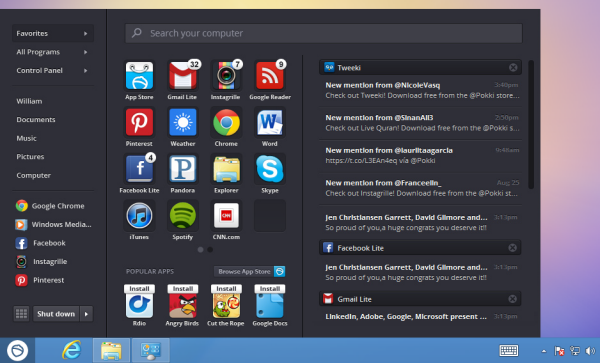 Click on Pokki’s Start orb in the lower left corner of the Windows desktop to launch a menu with a refreshingly new design pointing to various locations including Favorites, All Programs, and Control Panel. Clicking on All Programs brings you to all the application folders and list all programs installed on your PC. Adjacent to each item in the menu is a placeholder for a star which you can click to mark as favorites. Favorites appear on a grid in the Favorites section of the start menu.

You can open an explorer window to a specific folder, such as Documents, Music, and Pictures. A search field at the top of the menu lets you look for any program. There is also a Shutdown button conveniently placed at the bottom that offers options to shut down, restart, sleep, hibernate, log off, switch users, or lock Windows. Another dedicated button lets you quickly access the Windows 8 Start screen.

Aside from the start menu, Pokki brings an entire ecosystem of apps to Windows 8, for Pokki is also a platform that lets people run web apps on the desktop the same way they do on a smartphone. These apps are built on open web technology such as HTML5, CSS and Javascript and have their own app store from where they can be installed. Popular web apps and games such as Angry Birds, YouTube and Instagram can be installed and pinned directly to the taskbar. Pokki apps support push notification which show up inside the start menu or as an overlaying icon in the taskbar.

Right-clicking on Pokki’s Start orb brings up the Settings option where you can customize certain aspects of the program. Pokki also allows users to disable hot corners and boot directly to the desktop and avoid the Metro start screen entirely.