Microsoft touts Windows 8 as the most secure operating system ever. Despite this it’s possible to reset the account password using nothing but the built-in troubleshooting tools. All it takes is the Windows 8 System Recovery disc or USB flash drive and the patience to run a few commands. Surprisingly, the password reset hack isn’t unique to Windows 8. It also works on Windows 7, Windows Vista and Windows Server 2008. 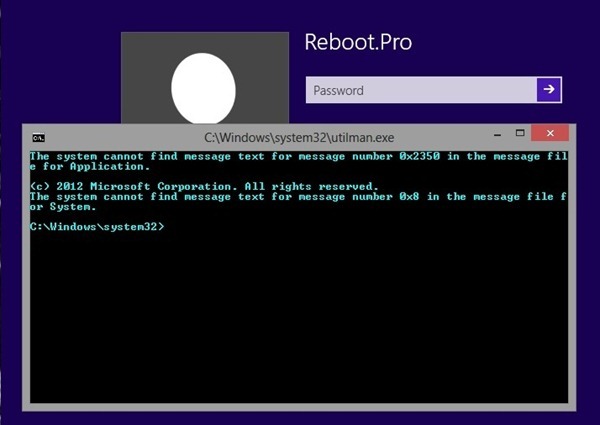 The trick to resetting the password lies in replacing the Ease of Access app (called utilman.exe) with a copy of a Command Prompt executable file (cmd.exe) with full administrator privileges. In a previous article we reviewed a tool that could replace the Ease of Access button on the Windows logon screen with another application such as Command Prompt or Task Manager, and noted how potentially risky this tool was. Indeed, as demonstrated by Jamal H. Naji at the website Reboot.pro, the Windows 8 account password could be easily reset by taking advantage of the very same security loophole that has remain unfixed for years.

The user begins by booting the locked computer with a System Recovery Disk which one can create on any Windows 7 PC. After the computer starts, the user goes into Troubleshoot option on the boot screen and chooses to run the Command Prompt. Using a few basic commands, the user can quickly swap utilman.exe with cmd.exe and restart the computer. Once the computer starts, the user will have access to the Command Prompt with full administrator privileges. All that needs to be done now is set a new password for the account using the “net user” command. Detailed instruction on how to do this can be found on this page.