You must be familiar with Giveaway of the Day (GOTD). It’s a popular website that hosts software giveaway everyday, all round the year. Each software offered on the site is free only on that particular day and should be downloaded, installed and activated on the same day. A protection software included with the download makes sure that you cannot install the program once the 24 hour giveaway period has expired, even if you’ve still got the installer.

But there was a weakness in the Giveaway of the day wrapper that was exploited last year to extract the original installer of the program. Without the security of the wrapper, this program could then be installed at any date irrespective of the current giveaway at GOTD. It took the website’s programmers a few months before the loophole was fixed. The exploit doesn’t work anymore. 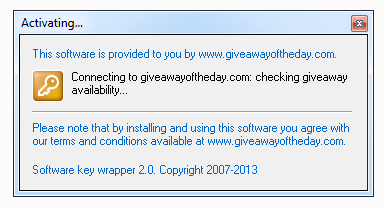 The new wrapper is more secure that stops people from keeping the software for future installs and it reportedly utilizes a technology similar to rootkits. But the wrapper’s security has been broken once again, this time by Maximus, a member of the cracking group REVENGE Crew. It is a tiny portable executable, that allows you to extract the original setup installer from the new wrapper and keep it for later use, just like before.

This is how to use it: First, download the software from Giveaway of the Day and extract the contents of the ZIP file to a folder. Inside there will be a Readme.txt which will contain serial numbers, a Setup.exe and a Setup.gcd. Now run the UnWrapper GOTD executable and it will popup a dialog box asking you where the extracted Setup.exe file is. Simply locate and double click on the file.

The setup procedure will then launch the Activating window will show while the server is being contacted. Then you should receive a popup box telling you that the original installer has been saved in the same folder as the GOTD setup executable.

Open the folder where you extracted the GOTD zip file and the program installer should be there. You can proceed with the installation that was already started, or cancel it if you don’t want to install the software right now.