Mozilla has just released the first beta of Firefox 20, that includes a new feature for private browsing, a new experience for downloads, and a handful of exciting developer features.

The Per Window Private Browsing has been finally pushed to the Beta channel. The new feature, which made its first appearance in the Nightly in December last year, allows users to open private windows without having to close their entire browsing session first. Currently, Firefox users who want to launch a private browsing session have to close all their current windows. Not any more. Now it is possible for users to view a Web page in private browsing mode and regular browsing mode simultaneously, in two separate Firefox windows.

A new private window can be opened from the Firefox orange menu. You can also right click on any link on a page and choose “Open Link in a New Private Window”. 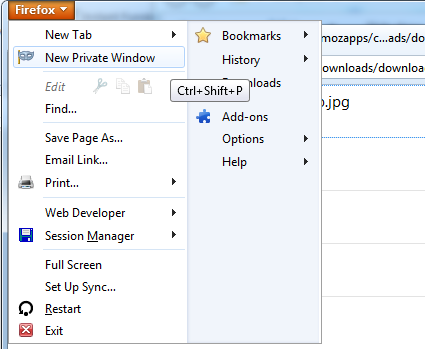 The download window still exist and can be opened by clicking on the “Show all downloads” link in the pop-up. But it is now part of the Library along with Bookmarks and Tags.

Firefox beta also includes a plug-in warning system that will warn you when a plug-in stops responding for more than 45 seconds, so that you can restart the plugin rather than restarting Firefox, allowing you to keep browsing the Web, uninterrupted.

Other changes include a new HTML5 DOM API that allows the browser to capture local camera and/or microphone streams directly, without the need for third party plugins, CSS Flexbox, a developer toolbox, providing quick access to popular developers tools such as the Web Console, Debugger, Inspector and Style Editor in one handy window, and support for Canvas Blend Modes.