Pattern locks are popular on touch screen devices such as smartphones because they are easier to enter than typing passwords. When Windows 8 debuted, pattern locks became an alternate but necessary inclusion. Although most people are using Windows 8 on traditional non-touch based systems, touch-based laptops, tablets and monitors are catching up especially after the release of the Surface pro tablets.

Windows 8 is the best solution for touch based laptops or touch monitor, but if you are not very keen on upgrading to Windows 8, there are ways to port several Windows 8 features to Windows 7 and lower. One of them is the pattern lock.

Eusing Maze Lock is a free software for Windows XP, Vista and 7, that lets you unlock your computer by drawing a pattern on the screen. Eusing Maze Lock’s implementation is closer in appearance and functionality to Android’s pattern lock than that the one implemented in Windows 8. 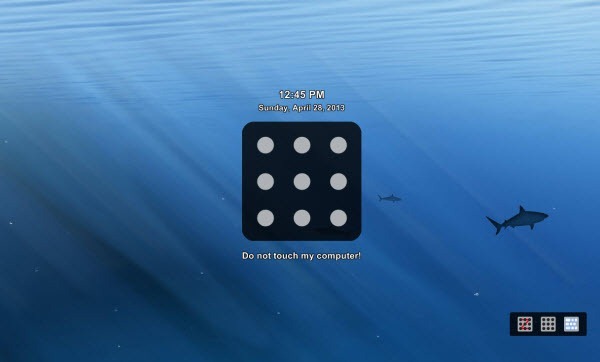 The default pattern lock sports 9 dots in a 3 x 3 grid which can be changed to 4 x 4 or 5 x 5 grid thus increasing the possible number of permutations. At first you need to set your own unlock pattern by connecting the dots. Remember the pattern, because the pattern is your password, and you’ll need it to unlock your computer later. There is an option to save the unlock pattern as an image file, in case you need to refer to it later.

To lock the computer either press the hotkey combination Win+A or click the lock action on the menu that appears when you right-click on the program’s application icon on the system tray. This will display a lock screen that is different from the default Windows lock screen. The lock screen can be customized to display an image of your choice or simply make it transparent. When the lock is engaged, you can disable the keyboard if you want to. 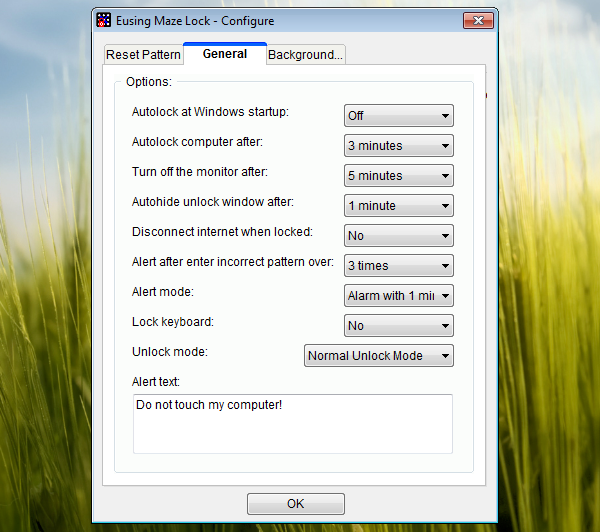 Three small buttons on the lower-right of the lock screen allows you to make the pattern password visible or invisible when you draw on screen, so that anyone looking over your shoulder should have a hard time guessing your pattern. This is akin to showing asterisk on a password field instead of showing the actual characters.

Other options include an ability to automatically lock your computer after a certain period of inactivity, turn off monitor, maximum number of incorrect entries before the computer sounds an alarm, custom messages on screen and a few others.

I can’t vouch for the security of this lock screen. The task manager is disabled, all right, but there could be ways to circumnavigate the lock screen. It is advisable not to depend on Eusing Maze Lock if there are important and confidential materials on your computer. The good thing is, you can still use the original Win+L lock screen in matters of utmost security without disabling or uninstalling Eusing Maze Lock. Treat Eusing Maze Lock as a novelty application.