Last week, Google gave everyone 15 GB of free storage in Google+ photos by combining the disk space of Gmail and Drive with Google+. Today, Flickr one-upped Google by taking the storage space all the way to 1 Terabyte. The biggest change Yahoo brings to the table is there will be no more selling of Pro subscription, and many of the previously imposed restrictions on free accounts were lifted, including the limitation on picture resolution and size. The announcement states:

At Flickr, we believe you should share all your images in full resolution, so life’s moments can be relived in their original quality. No limited pixels, no cramped formats, no memories that fall flat. We’re giving your photos room to breathe, and you the space to upload a dizzying number of photos and videos, for free.

Previously, only Flickr Pro account holders could upload pictures in full resolution. Additionally, the maximum size of pictures for free users is now a whopping 200 MB, a long jump from a meager 10 MB in the past. For the sake of comparison, even Pro users are limited to 50 MB per photo. Free users can also upload full HD videos up to 1GB each (Pro users have 500 MB), with playback up to three minutes. Users can also create collections, post to up to 60 group pools and limit the maximum image size available to others. 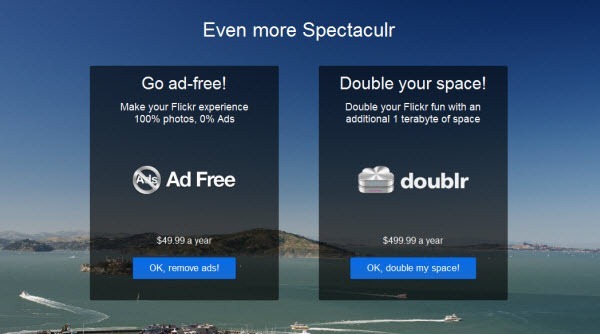 Henceforth, there will be no new Pro accounts on Flickr. Instead, there will be two paid plans – one is Ad-free for $50 a year, and the other is space “Doublr” at $500 a year, that will give paying users twice the storage space – 2 TB. The cost is substantially less than the competition. Google charges $100 a month for 2 TB disk space, while Microsoft SkyDrive goes only up to 100 GB at $50 a year.

Existing Pro users will have the ability to renew their subscription, for which they will get marginally better features at the expense of losing the 200 MB per photo advantage that free users have. Mostly, they will have unlimited storage and bandwidth.

This is what existing Pro users will get, should they choose to renew their subscription.

Certain Pro users will have the option to switch to a Free account until August 20, 2013. Switching to a free account will bump users to upload limits of 200MB per photo and 1GB per video, but will also cap users at 1TB of space. Other features such as replacing photos and the ability to see details of referrals and statistics will also disappear.

Flickr is also getting a new user interface for its website, with pictures and albums getting more prominence than before. The new Flickr looks very similar to 500px.com. 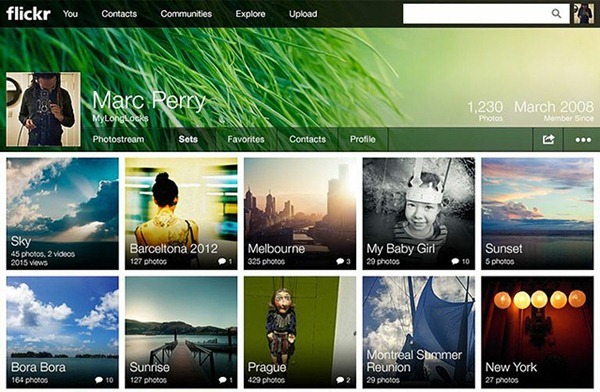 There is a new Activity Feed that combines recent uploads of the user’s friends with activity on their own photos. The new photostream has customizable cover photo and high-res profile picture.

Finally, there’s also a new Flickr app for Android device which you can download from the Google Play store.