How do you organize your digital camera pictures? I’ve found this question being asked and discussed a numerous times in photography related forums and social networks like Reddit and Stack Exchange. It’s a difficult question to which there is certainly no correct answer. 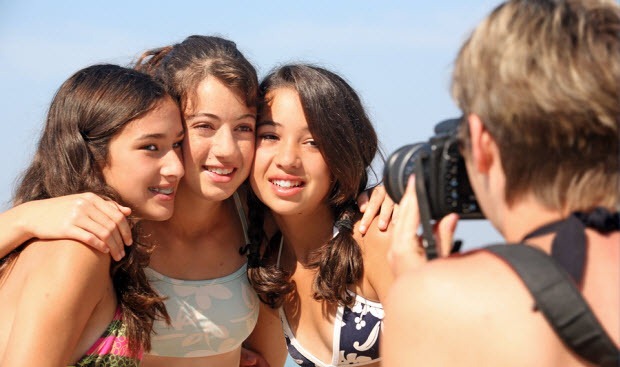 One approach is to organize your pictures into dated folders and then use tags to identify pictures by subject matter. Tags can be created and edited from within Windows Explorer or through specialized programs like Windows Live Photo Gallery (one of the best photo organizers) or Picasa.

If you have the habit of dumping all pictures into one single folder, here are 4 best tools to automatically consolidate them into folders based on date or events.

WIA-Loader is an excellent tool that lets you import pictures from your digital camera into user-defined folders organized by date and/or keywords, and rename them, in one swoop. Whether you plug in your digital camera using the supplied USB cable or use a memory card reader to transfer pictures, WIA-Loader will always detect it. 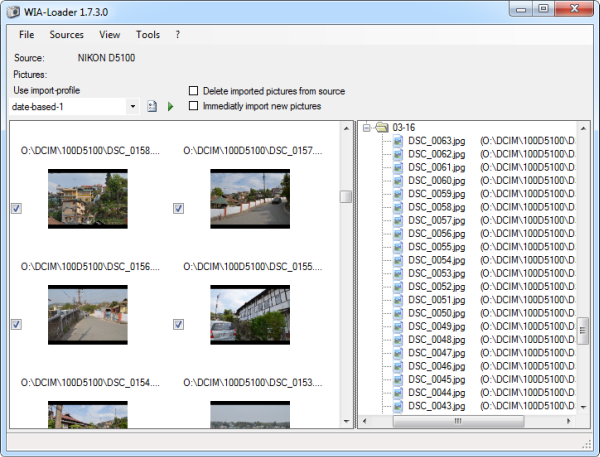 Before you start transferring pictures, you must create a transfer profile where you define how you want the pictures copied and organized. There is a benefit of using profiles – you can quickly switch from one set of settings to another, which is handy if you work with multiple cameras or multiple clients.

During transfer, WIA-Loader will rotate upright pictures automatically, set the pictures to be read only, geocode images with GPS information or tag images with keywords. If you check the Options dialog box, you will find extensive configuration settings to tweak the program’s behavior.

WIA-Loader supports all common image type including RAW files of every major and minor camera manufacturer.

Drawback: If you shoot both JPEG+RAW, WIA-Loader will import only the JPEG images. It would have been great if the program could import both into different folders.

With a simple and unambiguous interface, Adebis Photo Sorter allows you to quickly turn a completely disorganized photo collection of any size into a neat set of folders containing relevant photos grouped according to the rules you define. 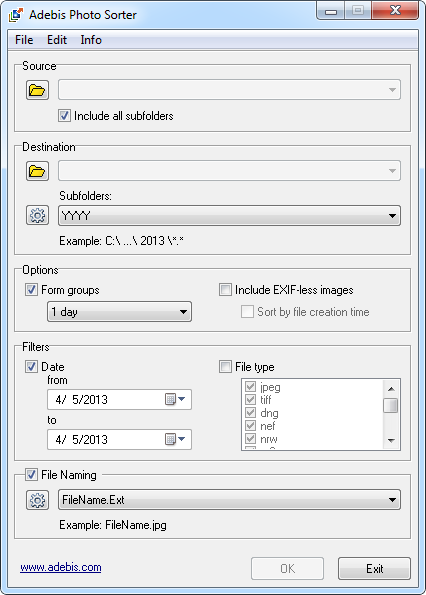 At the top of the program window you select the source folder – the one where your pictures reside. Immediately below, you select the destination folder – where you want the organized pictures to go. Here you define how you want the program to create sub-folders. The typical choices are YearMonth, YearMonthDate, YearMonth-date and so on. You can also create your own rules. Furthermore, you can group pictures by days or week.

If you want to reorganize pictures taken only between two particular dates, you can do that too.

Finally, there is file renaming option that can rename your picture files again by date, time or both. Naming rules are also configurable. 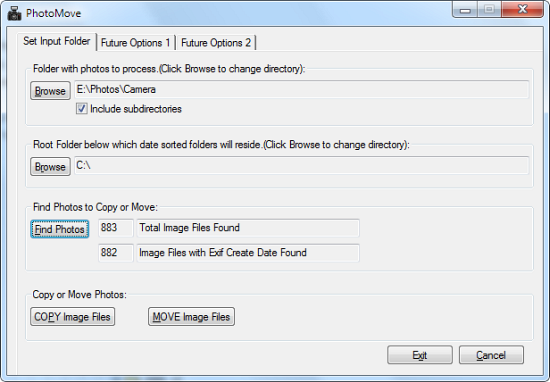 Wait for it to finish scanning and the program will show the number of files found and number of photos that has a valid EXIF creation dates. Then click on either ‘Copy Image Files’ or ‘Move Image Files’. 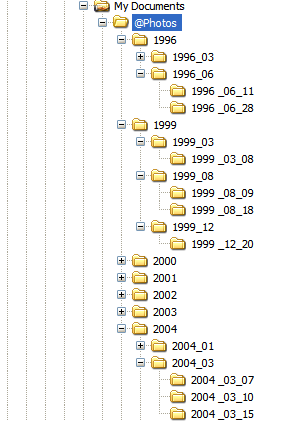 One caveat of PhotoMove is that it operates on all files with embedded Exif data, not necessarily picture files. So if the source folder contain other files that uses Exif to store dates such as Microsoft Excel files (.xls) and Adobe Acrobat PDF files (.pdf), these will get moved or copied as well. So pay attention to what directories you pick to move or copy files from.

Photo Organizer will automatically find and sort your pictures into events and separate folders, even if they exist in one single monolithic folder or scattered over your hard drive in many different folders. It also consolidates duplicate images if you have many on your system.

Photo Organizer arranges your photos into three levels of hierarchy – first by date, then by event, and then again by day. You only have to choose the number of days that separates one event from another. The default is two days. 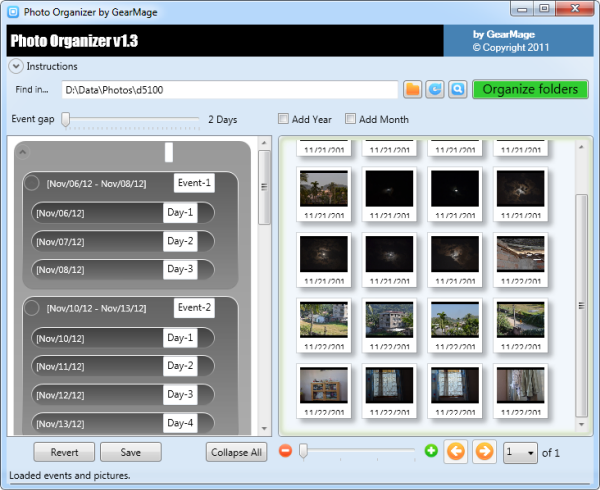 For example, say you went on a holiday on the first of July, returned on 10th and then attended your friend’s wedding on 14th. Photo Organizer will see that you took pictures between July 1 and July 10, then had a break of three days and again took more on July 14. The software will recognize this as two separate events and accordingly arrange pictures into two separate folders. Since the first event is spread over several days, the pictures will be arranged into sub-folders, one for each day. Optionally, you can add the year and month (the first level of hierarchy).

Before Photo Organizer finalizes the move it will ask you to name the events and the days.

The method works as long as two events are separated by certain number of days. The approach fails when two events overlap or follow one another on successive days, because there is no way to re-organize the folder structure once the software decides where each picture should go.

Now Read: Organize Your Photos by Renaming Them With EXIF Data