Up until now, the Windows Store for Windows 8 was available only through the Store app from Windows 8. If you didn’t have Windows 8, you couldn’t see what was on offer. There are, of course, third party sites such as MetroStore Scanner and Great Windows Apps that offered ways to browse and search for Windows 8 apps from a browser, but officially there was no solution. This is different from every other app store model, including Microsoft’s own Windows Phone Store. Other app stores for Android, iOS and Blackberry are accessible directly from a web browser.

But now, Microsoft is allowing users to search for apps on the official Windows Store from web browsers. This means that users who are running Windows 7 or previous versions of Windows, or in fact, just about any operating system can also look through the Windows Store without getting Windows 8 first.

To visit the Windows Store from a web browser, click here. 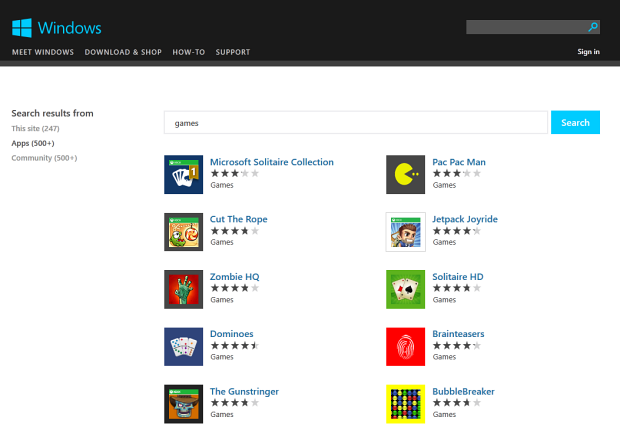 Microsoft still doesn’t allow browsing the app store in a way that is possible from the Store app. So segments like “Popular Free Apps”, “New Apps”, “Top Paid” or “Best Rated Apps” are missing. As of now, you can only search the app store with the title of the app or a keyword, such as “games”. The search function is very primitive. You can’t filter the results by price, for instance, or drill down the list by sub-categories, but it’s a start. Microsoft may finally allow full access to Windows Store sometime later, but this is only a speculation.

Try out Windows Store from the browser, see if you like it. If you don’t, stick to third party apps mentioned in the beginning of this article.