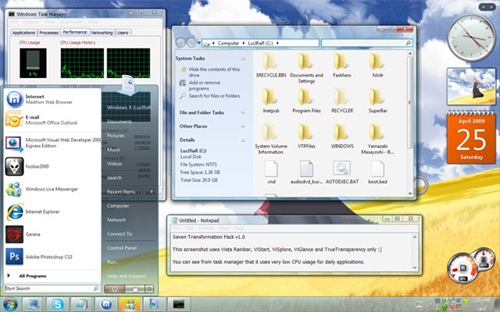 It seems that the Windows Seven Transformation Pack 1.0 was made by making minor updates to the Vista Transformation Pack 9.0 by the same developers. Smart guys. After all, there isn’t much difference between the two except the taskbar which became the Superbar, some new sounds schemes, new icons and a few changes here and there.

Actually, you can make some of these changes by using standalone tools. For instance, the previously mentioned ViSplore to get Vista’s or Seven’s explorer. Superbar can be achieved by using another tool called ViGlance without making any other changes to the system. In fact, the Windows Seven Transformation Pack uses this same ViGlance to get the Superbar. Try it. It actually looks pretty good.