A breathtaking new image taken by astronauts on the International Space Station clearly shows the various layers of Earth’s atmosphere during sunset over the Indian Ocean. 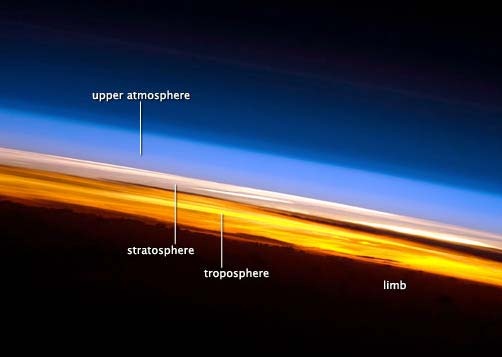 A brilliant sequence of colors in the image denotes each of the layers of Earth’s atmosphere, which are visible here because the picture was taken while the space station had an edge-on, or limb, view of the Earth. From this vantage point, the Earth’s curvature can also be made out.

The troposphere — the lowest layer of Earth’s atmosphere and the one in which humans dwell and weather occurs — appears in deep oranges and yellows. The troposphere can extend from the planet’s surface to a height between 3.5 to 12.5 miles (6 and 20 km).

This lowest layer contains more than 80 percent of the mass of the atmosphere and almost all of the water vapor, clouds, and precipitation.

Several dark cloud layers are visible within this layer in the image. Variations in the colors are due mainly to varying concentrations of either clouds or aerosols (airborne particles or droplets).

Next up is the stratosphere, which appears as a pink to white region above the clouds. This atmospheric layer generally has little or no clouds and extends up to approximately 30 miles (50 km) above the Earth’s surface.

The stratosphere is also home to the layer of ozone that protects the Earth’s surface and the creatures that live on it from the sun’s harmful ultraviolet rays.

Above the stratosphere, blue layers mark the upper atmosphere (including the mesosphere, thermosphere, ionosphere, and exosphere) as it gradually fades into the blackness of outer space.

The astronaut aboard the space station was facing west when they snapped this picture. Astronauts in low-Earth orbit see 16 sunrises and sunsets every day due to their high orbital velocity (more than 17,000 mph, or 28,000 kph).

Related: How to spot the International Space Station