We have seen a few resource utilization indicators in the past that can be pinned to Windows 7 taskbar (SuperbarMonitor, Taskbar Meters), but the RAM Taskbar is uniquely different. It uses the taskbar itself as an indicator.

RAM Taskbar displays a colored meter in the taskbar indicating the percentage of memory usage by the computer. The meter doesn’t occupy any space in the taskbar – it simply appears as a colored band. Other program’s icons can continue to reside on the taskbar as before.

The indicator color is green when memory usage is at acceptable level. It changes to orange when memory usage hits warning levels and to red when usage reaches extremely critical levels. The trigger level for warning and critical states are user adjustable, and so are the colors. 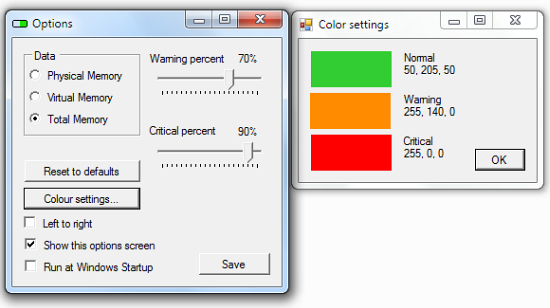 The program offers a few other customizable options, like you can make the meter show only physical memory or only virtual memory or total memory usage, and move the meter bar from left to right.

RAM Taskbar utilizes the color changing capability of Windows 7 taskbar, that other programs have taken advantage of too. Such as AeroWeather that changes Windows Aero color by weather and invisible Windows 7 taskbar.