The program has a “Home” screen which offers these four tools for selection. 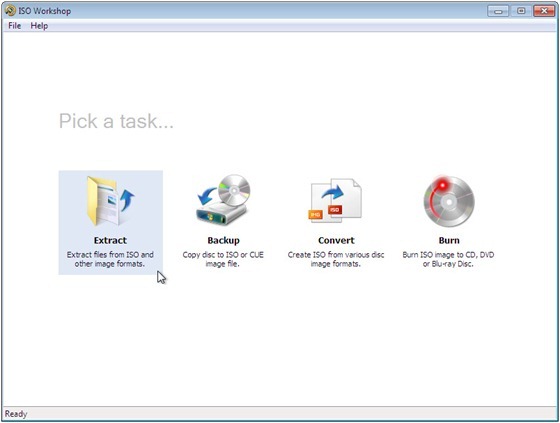 The extract function enable you to retrieve specific files from ISO and other image-based formats including BIN, NRG, CDI, IMG and more. Some file archiving programs such as the commercial WinRar is able to extract files from ISO images too. But WinRar can’t open obscure format such as CUE and CDI or the proprietary NRG format used by Nero products. ISO Workshop handles these all.

The backup function enables you to create ISO, CUE or BIN images from physical disk such as CD, DVD and Blu-Ray.

The convert function takes any of the supported image disk format and converts it to either ISO or BIN. Here the program fails to appeal. Although it accepts a variety of input formats such as ISO, CUE, BIN, NRG, CDI, MDF, IMG, GI, PDI, DMG, B5I and B6I, it can output to only two formats – ISO and BIN.

The burn function lets you burn a disk image into a physical medium. Again, support is limited to only ISO and CUE.

Over all, ISO Workshop is a good program but it could have been better.