Last week’s US Navy SEALS mission in Pakistan that resulted in the death of Osama Bin Laden has now been replicated as a free multiplayer game that uses Valve’s Source Engine, reports Newowin. The Kuma Games development team has released the latest chapter of their classic First Person Shooter Kuma War II, that allows gamers to recreate the mission that changed the world.

The 107 episode entitled Osama 2011 pits one team of players as the Navy SEAL Team Six who raided the al Qaeda compound in Abbottabad, Pakistan where Bin Laden was reportedly living for the past several years. The other human team take on the roles of Qaeda defenders who have to keep the SEAL team from killing Bin Laden. The now late leader of al Qaeda is himself controlled by computer AI rather than by a human in the game. The SEAL team’s main objective is to find and kill Bin Laden but there are other missions as well such as recovering his body and also obtaining intel about al Queda from the compound.

The game is free to download and play but requires the player to watch video ads. 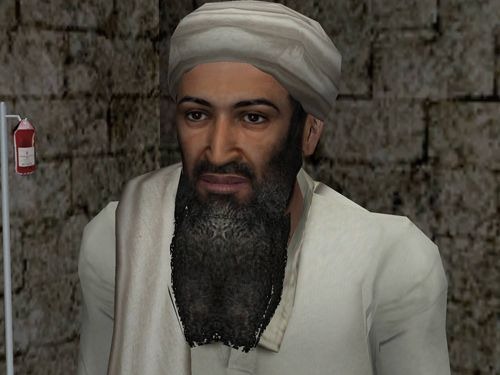 Founded in 2003, Kuma War is an episodic game series that re-creates real-world conflicts in video game format using information culled from news accounts, military experts, and Department of Defense records. Episodes consist of a playable mission, extensive background text, and often include interviews with military experts, soldiers and people who actually participated in the events described.

Kuma War now features over 120 missions with most episodes drawn from the war in Iraq. Kuma has also re-created events from Afghanistan, Iran, South Korea, Vietnam, Sierra Leone and Mexico. The first mission of the game was based on capture of Saddam Hussein. Other significant episodes include “John Kerry’s Silver Star”, “Fallujah: Operation al Fajr”, and “Osama 2001: Tora Bora.” The main distinguishing feature in Kuma War is its extensive background information for each mission, which includes satellite photos, original articles and a multimedia library making each game a delightful lesson on modern conflict history.

While Kuma Games may be the first that turned the killing of bin Laden into a 3D shooter game, it’s not the only game that includes appearance of Bin Laden. Smaller Flash based games have hit the internet within hours after news of bin Laden’s death. 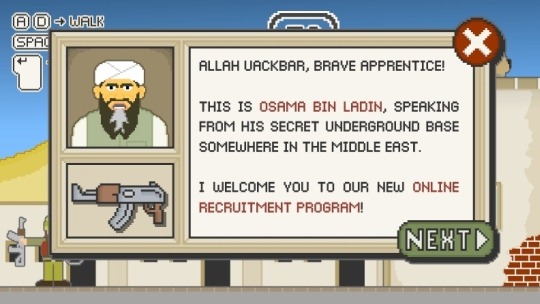 Newsgrounds, popular home to free-to-play games, received a user submitted title called “Mujahedin” only 6 hours after President Obama announced the killing of Osama. The game lets players take control of an Al Qaeda suicide bomber who must attack a United State Military base by either “Praying to Allah” or “Playing with the Trigger”. If the player succeeds, Bin Laden himself offers to become the winner’s drinking buddy.

Another online games site Games2win also features ‘Kill Osama Bin Laden’ – a game themed on the Osama assassination. The game has 7 levels starting from tracking down Osama to his hideout in Pakistan to finally killing him after engaging in several gunfights with Al Qaeda militants.

Games based on real and current events, often created in a satirical way, is a known phenomenon. Checkout some previous games based on Wikileaks, recession and George Bush shoe throwing.