YouTube has a rating system where users can vote when they like or dislike a video. The video rating informs future viewers whether they are going to like a particular video or not, before they actually watch it. Currently, the video rating is visible only on the video page. YouTube does not show ratings on search results page or on related videos that appear on the sidebar. The only metric YouTube shows against video thumbnails when you browse the website is the number of times the video has been played. But the number of views is a useless metric. Let me illustrate this with an example. 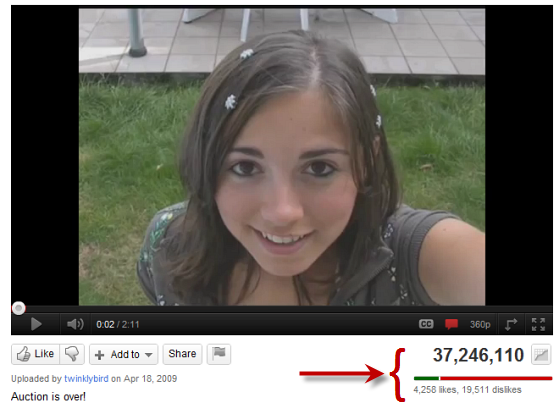 The image above shows a video that received over 37 million views, but got 19,000+ dislikes against only 4000+ likes. In other words, 82% of the viewers disliked it. How can a video that was disliked by 4 out of every 5 viewers attract so many views? Because of this misleading thumbnail.

The thumbnail shows what appears to be a woman taking off her t-shirt. If only the 37 million testosterone charged men paid more attention to the video rating, they could have saved 2 minutes of their lives.

This happens to all of us. We click on videos based on the number of video plays, because that’s what YouTube displays on the search results page, and waste precious minutes. The better metric for judging the quality of the video content is the video rating.

How to show video rating on all YouTube video thumbnails

Google Chrome: YouTube Ratings Preview is an extension for the Chrome browser that displays the rating of the video in the form of a small bar underneath the video thumbnail on YouTube. This is visible everywhere on the YouTube website – on search results page, video trends, related videos or video responses. If there is a video thumbnail, the YouTube Ratings Preview will show the rating of the video. 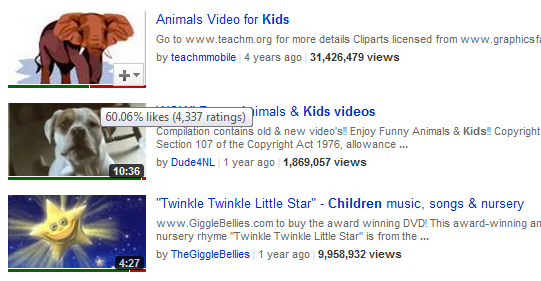 Simply hover the mouse over the red/green bar to show details in tooltips.

Firefox: YouTube Rate Everything is a greasemonkey script that does a similar, in fact, a better job on Firefox. This script shows the number of likes, dislikes and the number of times a video has been favorited, right below the video thumbnail without moving your mouse. The rating bar appears below the video title and there is enough padding around it to be comfortably visible.

You can now determine at a glance which videos are worth watching and which are not.